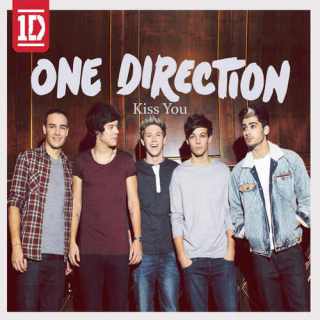 These hot hot British boys are back to make us swoon. After countless teasers (which reminds me a lot of Britney Spears’s countless teasers before the video premiere of ‘Hold It Against Me’ last 2011), the official video for their new single “Kiss You” has been released.
Vaughan Arnell returns to the Director’s Seat for the third time for the band’s third single from their second album, “Take Me Home”. This uptempo, up-beat dance pop track was written by Kristoffer Fogelmark, Kristian Lundin, Albin Nedler, Rami Yacoub, Savan Kotecha and Carl Falk and produced by Yacoub and Falk, who produced the 1D smash hits, “What Makes You Beautiful”, “One Thing”, and “Live While Were Young”.
The video features the boys, Niall Horan, Zayn Malik, Liam Payne, Harry Styles, and Louis Tomlinson, on a video shoot with these sequences: riding a motorcycle and a car, in a jail, surfing, skiing, and all sorts of craziness. Although I was hoping for a music video that would coincide with the song’s lyrics, but it turns out that it’s not.
It’s a fun video to watch, to be honest. They have retained their taste in music videos, which is purely having fun, and that’s just basically it. This time around, I find their formula too common now since their music videos were all about having fun, without really connecting with the song’s lyrics. Comparing it to “What Makes You Beautiful”, “One Thing”, “Live While We’re Young”, and this new video of theirs, I find it mostly the same. I would still love to see the band in a uniquely made music video. Song wise, it’s a pretty cool pop track that I would love to play while driving, or strolling at the mall.
Check out One Direction’s new video, “Kiss You”:
Bite Marks: 3.5 out of 5